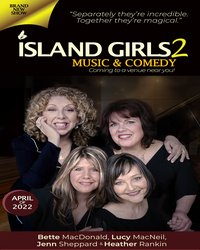 The fab four have been performing together for more than 5 years and in that time, have developed undeniable chemistry on and off stage. Together, they deliver non-stop fun with spirit and a bit of sparkle. They have the kind of energy that immediately resonates with their audiences. The result is a wonderfully intimate show filled with raucous laughter and plenty of breathtaking musical moments. ISLAND GIRLS 2 Music and Comedy features the talents of four of Cape Breton Island’s busiest performers: Bette MacDonald, Heather Rankin, Lucy MacNeil and Jenn Sheppard. They are backed by a stellar band of some of Cape Breton’s top musicians. Tickets available starting November 29 at tickets.phcivic.com!