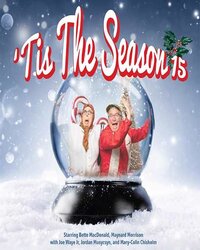 Believe it or not.... Tis The Season is celebrating it's 15th anniversary! The show that began as a one night stand has grown into a highly anticipated Christmas tradition. This unique and hilarious celebration with its' cast of Cape Breton characters, brings back memories of Christmases gone by as they deal with all the tribulations that the holiday season can bring. As sure as the man in the red suit will pop down the chimney, Mary Morrison, Beulah Claxton, Martin MacKinnon, Wayne Tomko and their island friends will be decking the halls. Tis the Season to be very jolly indeed!!

'Tis The Season has given us a wonderful way to celebrate the holidays. These audiences have become our Christmas families. Our festivities begin with a visit to the towns and theatres that feel like home to us. For us, it's a most lovely Christmas gift.' - Bette MacDonald