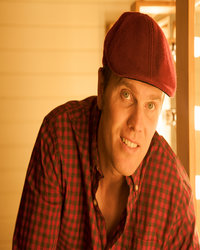 Dave Gunning is best defined as a master craftsman. Over the course of 23 years and 11 albums, the Nova Scotian folk singer/songwriter has diligently sharpened his skills, developing into a poetic storyteller and emotionally convincing singer with few equals. The fruits of those labours are now vividly on display in his latest collection of songs, Up Against the Sky. The recording was co-produced by Gunning and Jamie Robinson in Dave’s home studio. Eight of the ten songs are co-writes, with Dave’s writing partners including Jamie Robinson, Ray Stewart, Thom Swift, Paul McKenna, and Mark Lang. Gunning contributed the bulk of the instrumentation, including bass and drums, and featured musical guests JP Cormier, Andrew Alcorn and the Atlantic String machine. Along with richly-deserved peer respect, Dave Gunning has earned a shelf full of music industry honours. That tally currently stands at nine East Coast Music Awards and two Canadian Folk Music Awards, plus a 2012 Juno Award nomination. Join us for the official, local launch of Dave’s newest recording Up Against the Sky.