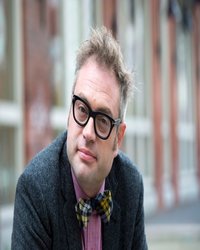 Steven Page’s distinctive and powerful tenor is among the most instantly recognizable voices in popular music. A member of the Canadian Music Hall of Fame with former bandmates, Barenaked Ladies, Steven Page reunited with the band he co-founded for their induction at the 2018 JUNO Awards – a night capped off by an exhilarating two song performance. With a strong focus on his own career, Steven Page is busy. Since becoming a solo artist, Steven Page has been carving out a diversified niche for himself that expands beyond recording and performing through an exhausting array of projects in music,film, theatre and television. He has composed six Stratford Festival scores, has collaborated and toured North America with Toronto’s innovative Art of Time Ensemble and performs with his rock star pals as a member of the Trans-Canada Highwaymen. Still the dynamic stage presence he’s always been, Steven Page is the consummate entertainer, performing music from both his solo career and his BNL years.