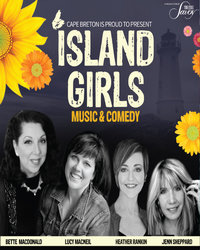 The Fab Fem Four- each representing a different facet of Cape Breton Island’s entertainment community- are set to combine their individual musical and comedic talents to take audiences on a journey to celebrate all things Cape Breton. Show-goers can expect to enjoy some belly laughs while they catch up with a few familiar characters, sing along with some old favourites and maybe even hear some new ones.

Presented by: 101.5 the Hawk, The Reporter, Maritime Inn & the Town of Port Hawkesbury