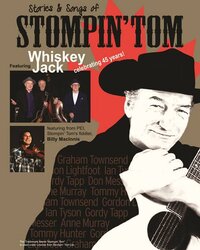 Whiskey Jack Presents Stories and Songs of Stompin' Tom” was born shortly after Stompin' Tom died in 2014. However, Whiskey Jack started collecting the songs and stories that eventually became part of this show in 1990 when Duncan Fremlin, Whiskey Jack's leader, toured with Tom for the first time. There were many adventures along the way. The show is 100% Canadian - not only a portrait of their years on stage with Stompin' Tom, but also anecdotes and songs from their years as cast members on the CBC's Tommy Hunter Show. The show includes a multi-media presentation featuring audio clips and photos from the band's many years on stage with these two Canadian giants. Whiskey Jack has been on the road since 1977 and with numerous albums and singles to their credit. Their “Ol Back Porch” segment on CBC-TV's Tommy Hunter Show led to other TV specials and appearances on CTV's Alan Thicke Show. In the 1980's, they were often described as the most televised Canadian country music band in the country. Many have described Stompin' Tom as “our national voice”, speaking about the day-to-day struggles that we all go through to survive in this severe climate. This voice was born during Tom's travels, having criss crossed the country many times by every means imaginable and being befriended by average Canadians across the country. Whiskey Jack witnessed this each night as they backed up Tom on his stage shows. It was truly moving to watch the connection between Tom and his fans. Tom's unabashed patriotism is a theme that resonates with the audiences who attend these shows. Tom's uncompromisingly Canadian principles would cost him dearly over the years as he turned his back on opportunities to join the Canadian musical establishment, the same people who shunned him and mocked him when he was first starting out. This too plays a major role in our show. Our show will feature a mix of Connors' greatest hits, stories and audio recordings of him during performances. If there's a Tom song about your community, we'll sing it! And each night, you'll hear that booming Stompin' Tom voice speaking directly to the audience. We guarantee it will put a smile on your face.

Supported by 101.5 the Hawk, Port Hawkesbury Reporter and Maritime Inns