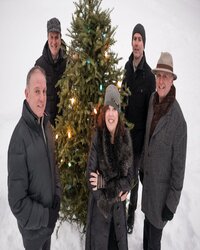 One of the most beloved concerts of the winter season, the Barra MacNeils East Coast Christmas features a highly entertaining mix of traditional seasonal fare along with entertaining stories and dance, stamped with their lush harmonies and brilliant instrumental stylings. Their unique show is crafted to bring a Celtic spin to traditional favourites and their own original musical treasures. Hailing from Sydney Mines, Cape Breton Island, the five versatile siblings are deeply rooted in Celtic music, culture, dance, language and history. Their numerous critically acclaimed recordings have included their own original songs as well as tried and true standards, both instrumental and vocal. Over their long and robust career, the Barras have taken their music across the globe including Europe, Scotland, England, Barbados, the U.S. and from Canada’s coast to coast to coast. Says Lucy MacNeil, who released a single of her own titled Hope for One and All during the pandemic: “it has been too long since we were able to bring our Christmas show on-stage and we can’t wait to be back to celebrate the season with our favourite Maritime audiences”. The Barra MacNeils live concert experience is family entertainment at its highest level leaving magical memories that will last beyond the season and bringing back audiences time and again.